Lab managers communicate regularly with several functional groups within their organization.  To a large extent the focus of our work is to provide data that help these folks make well-informed decisions to achieve their goals.

We all know that successful communication should be tuned to the perspective of the audience.  In addition to these preferences we need to understand the biases inherent in how people think and process information – These cognitive biases are essentially mental shortcuts that help people make decisions faster.  Not necessarily better, but faster.

Cognitive bias can distort the decisions because they color the way data is perceived and evaluated.  I often run into ANCHORING.  This bias gives extra weight to the first information we are presented with.  It seems that any later information to the contrary needs to have extra support to displace this initial idea. 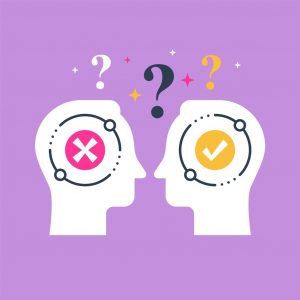 I was recently in the market for a new analytical balance.  My first quick internet search for “analytical balance” turned up a unit that lists for $2,000.  Subsequent review of different models that actually meet our needed performance standards run about $4,000.  While the cheaper scale was not up to the job, all the other models seemed expensive.  Interestingly, an assistant who initially identified the more expensive models immediately questioned the $2,000 model and wondered what was wrong with it because it cost so little.

It is important to keep this tendency in mind during negotiations, as the first value discussed can alter the perceived value of the deal.  Salespeople may initially propose an inflated price – and then offer discounts that make the final offer a much better deal.

Anchoring can also be significant issue in problem solving.  The first possible cause discussed can dominate the focus of efforts and detract from identifying the true root-cause. A firm I was working with had a significant quality failure.  It was immediately noted that one feedstock was slightly out of specification.  Without further investigation the supplier was contacted; and operations, purchasing, and quality personnel on both sides were quickly involved.  Ongoing lab-work revealed that the actual cause of failure originated from variations of a non-specified parameter in a different feedstock.  The true cause would have been uncovered much sooner if less weight had been given the initial finding.

How can you address anchoring bias?